My first visit to the ISPO, the world’s largest exhibition for the sports business, was a complete success. I had three very busy days and have to process the many impressions first. Here is a short report on my experiences.

After a long journey by car I arrived in Munich at noon and had a short bite to eat in the Blogger-Lounge before my first appointment. While strolling through the first halls I met a familiar face: I’ve been following Marina on Instagram for quite some time now and was very happy to have met her in person.

As chance would have it, I ran directly into Sascha (Trailrunnersdog.de), who supported the booth of Orange Mud. So I was able to get first hand information about what he likes about their products and what’s new.

To me it was an interesting experience to try on one of the vests. Depending on the model, they are rather minimal, but offer many functions. They sit quite high on the back, but also leave plenty of room to sweat.

Especially the Phone Flask Vest 2.0 immediately appealed to me. I have never seen such a cool, minimal solution to carry only the most necessary equipment.

At the booth of Tecnica I was then shown the Origin – an adaptable trail running shoe. It can be adapted to the runner’s foot by thermoformable elements, which could be done in a specialist shop directly on site when trying it on. I find the concept very exciting and look forward to running the Origin myself soon.

At Buff there were new versions of the Thermonet balaclava to see, which seems to improve many of my critiques (for runners). I was able to express my enthusiasm again for the Dryflx+ products and I will surely check there again in summer for headwear.

I also ran into Dæhlie, a Norwegian outdoor brand that has just launched its first running collection. With 20 years of experience in cross country skiing, it didn’t seem like a big step, because they obviously did a good job in design and function. This was also confirmed by Patrick, a very likeable ultra runner I have known for several years now. We simply meet too seldom, so this was also a very welcome coincidence. :)

Just now I’m still running the Kaptiva in the winter version (with GoreTex membrane), but the new summer models are just around the corner. First of all the Jackal was highly recommended to me – especially because the toe box offers my feet a little more room.

I have also discovered something new at Black Diamond: I’ve never noticed the Sprint before, but it seems to be a lot lighter than the Spot. Fortunately, the dark season is almost over, but the next one will surely come. ;)

Of course I also had to visit Nico Russ, who wants to revolutionize running shoes with his idea ;) Instead of taking the shoe out of service when the sole is worn out, he uses exchangeable elements which prolong the life time of the shoe and make it individualizable.

After the show I met Kurt – a triathlon veteran and coach from Switzerland. Apparently the blog is also read there and the topics seem to be the same on both sides of the Alps. Anyway, we didn’t run out of things to talk about and so we were only interrupted by closing the restaurant ;) It was very nice to meet you, Kurt.

After half a day at the fair yesterday, I was a little worried about how I would get through a whole day… But fortunately the day started with a casual breakfast and interesting conversations in the Blogger-Lounge. I met Jahn (Fitvolution), Tom (Alles nur Sport) was there and I was also able to shake hands with Gerald (watches and tours) for the first time.

Together we went on a guided tour to hall B4, where we had the opportunity to visit five young companies with their ideas and products. There were inflatable roof racks, innovative inline skates, an improved safety binding for kitesurfers, e-mountain bikes and a smart resistance band.

In addition, I also looked at Keego, who make an intriguing drinking bottle from flexible titanium. By avoiding the use of plastic, drinks are to remain tasteless and also protect the environment.

Also Sporthacks sold me their idea of a modular sports backpack well – because the guys just thought of everything. ;) They also actively involve the community to improve their design and develop new extensions for the product. 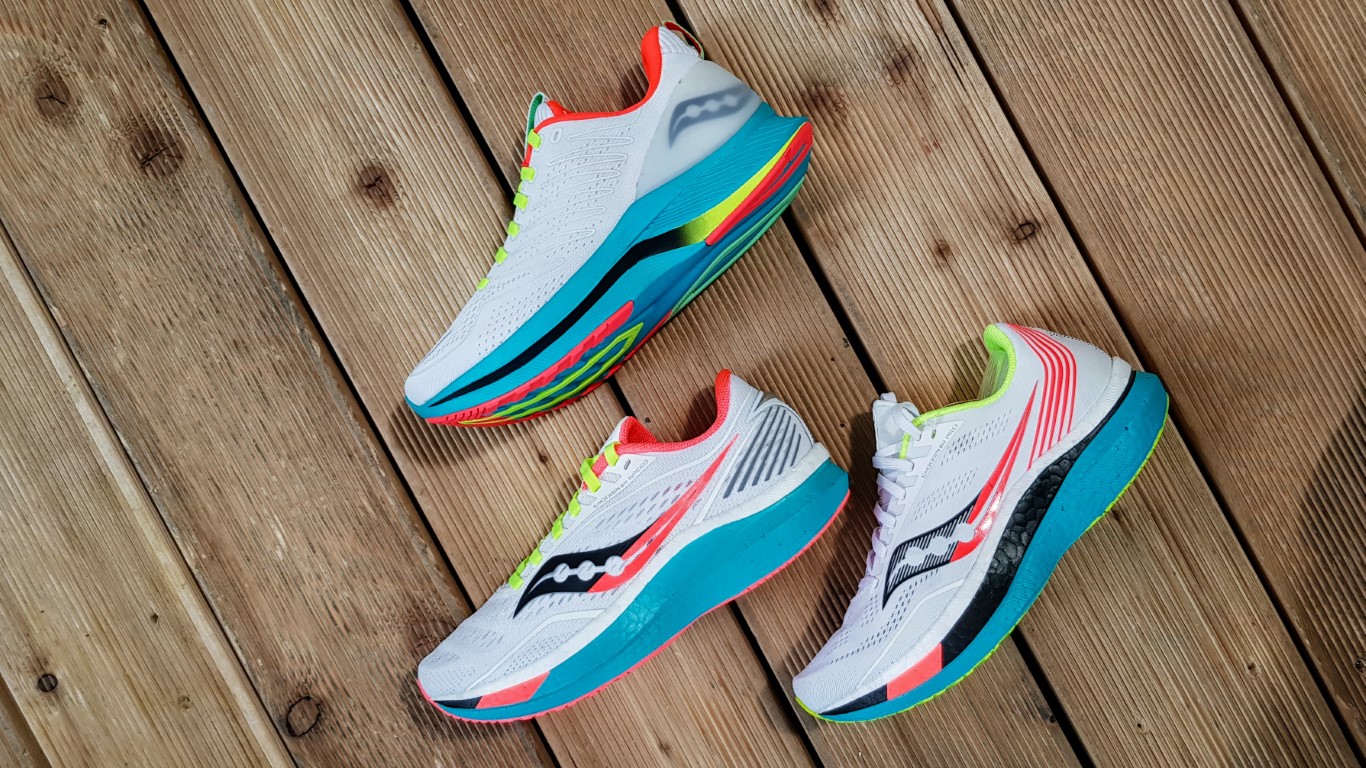 My highlight of the day followed: I could take a look at the new endorphin line from Saucony. Rumours about a shoe with carbon plate had been around for quite a while, but the actual product announcement is only a few weeks old. So I was somewhat excited when the three shoes were suddenly conjured out of a small bag. :)

The Saucony Endorphin Pro is the model for top athletes and has got a new super light damping material besides the carbon plate: PWRRUN PB. But it’s probably not only the plate that is supposed to give the runner a “push forward”, but also a new shoe geometry that all three models have in common.

The Endorphin Speed is the shoe for speed runs. Equipped with a hard TPU plate and the new Speedroll technology, it is the model for preparing for competition. Basically it has all the advantages of the Endorphin Pro, but without the carbon plate.

As the third in the bunch, the Endorphin Shift is ideal for training and provides a new running feeling thanks to the Speedroll technology. It has a strikingly thick sole and of course uses the new PWRRUN+ material. But we will have to wait until early summer (June/July 2020) for all three shoes to be availiable.

At the Icebug booth no one could just walk by. The demonstration of spike shoes on a block of ice was too fascinating. Cameras were constantly being pulled out and it was checked by hand if this is real ice ;)

The topic of sustainability was also very prominent, specifically through the use of recycled materials in running shoes.

Somehow the topic of running was not that big at ISPO, but Garmin at least raised the flag with their booth – as the only manufacturer of running watches. Actually, there were no really exciting news, but still a small highlight, because the Garmin Fenix 6X Pro Solar won an ISPO Award 2020 in gold.

I am very curious to see how the watch will perform in the field – especially with regard to the solar function. It is currently quite unique in the field of running watches and is only installed in Garmin’s top model.

Not as an exhibitor but as a visitor I met Christian Schwab from Thoni Mara at ISPO. It wasn’t the first time that I had noticed the brand in terms of sustainability and production in Germany, so I’m looking forward to testing some of the pieces from the collection.

You don’t know Zpurs?! Me neither – until now. The patented system for hanging up shoes is so self-evident that you wonder why it hasn’t been around for a long time. Alistair was kind enough to give me a hanger to test.

With packed up bags I went to the fair again. The blogger colleagues apparently didn’t have that much stamina and so there was not even coffee in the lounge. Fortunately Patrick helped me out there. :) During the last stroll before my big appointment of the day, I suddenly found myself in front of Sketchers booth.

The press-pass gave me access and so I got a halfway exclusive insight into the current running shoe line. All models were incredibly light and also looked pretty great. I had never seen or at least consciously perceived one of the shoes before.

But somehow I would have liked to take at least three of the models to run immediately. Let’s see if something will come of it and I can gain my own experience with them.

You should always keep the best until the end – and that was definitely the meeting with Tim Soar to me. The head and name-giver of Soar Running has his own Wikipedia entry – and not without reason, because he has done quite a lot in his life. Nevertheless our conversation turned almost immediately around the subject of running, our training and the next race starts. We have discovered many similarities and parallels – not only in running.

It was very inspiring to talk to him and to understand even better what makes Soar so outstanding. Of course, he also gave me a little preview of what products can be expected this year. I will only reveal this much: for me there are at least two highlights. :)

Even though I was a little disappointed that I had to search for running gear at the fair, meeting so many personal contacts more than compensated me. I had hoped, but not necessarily expected, to meet so many people in Munich whom I only knew “digitally” until then.

Those three days feel more like a whole week right now. And I am sure that I will benefit from the input, the discussions and the many new ideas for much longer.

Shortly after the ISPO I talked to Sascha from trailrunnersdog.de about our experiences at the event. But it was also about blogging and some nerd topics (in German):