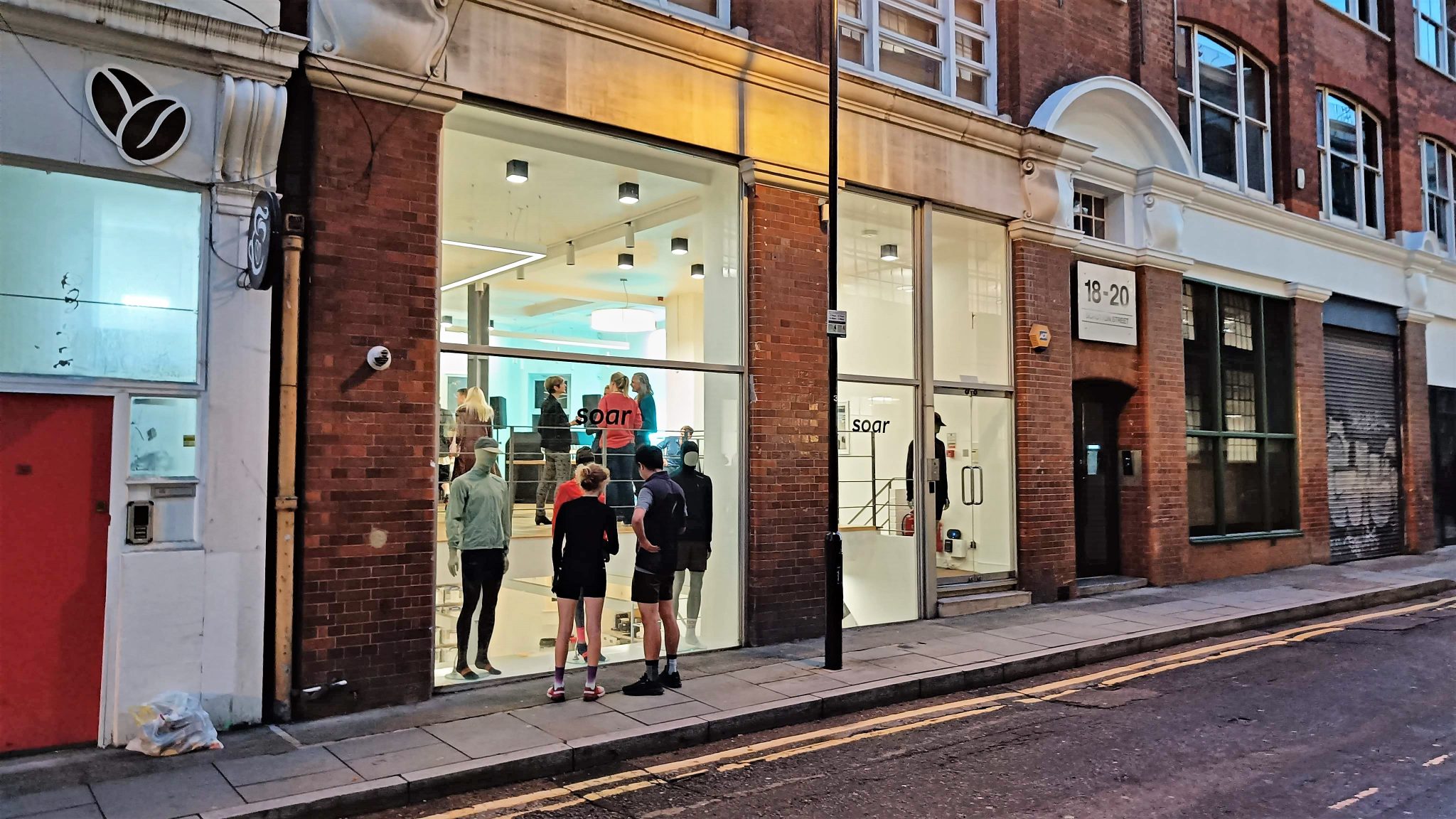 It was a pretty crazy thing to do, to fly to London for a party. But it was absolutely worth it!

It was almost impossible to fly to London at short notice and in the middle of the week to go to the SOAR Studio Opening Party. But the idea stuck with me.

Since I discovered the brand about six years ago, I have quickly become a fan and by now I almost feel like part of the family.

Being able to make the crazy trip together with Richard then sealed the decision: it’s off to London!

I seem to have been lucky with the travel booking: I was able to fly there very early on Thursday and back quite late on Friday. So I had almost two full days in London.

As it was my first time in the city on the Thames, I made sure to get lots of valuable tips beforehand so that I could make good use of my time. From London City Airport, thanks to the uncomplicated underground network, I first went into the city centre to meet Richard for a coffee and some breakfast.

Afterwards, a few tourist highlights were planned. However, the weather was typically British, so I changed my plans quite quickly in favour of museums.

Free entry to museums like the Tate Modern Gallery or the British Museum is great. Where else can you see the Rosetta Stone and the Yves Klein Blue in one day!

After a half marathon on my feet, I went back to the hotel to catch my breath before the highlight of the day. Of course, not without making further discoveries along the way.

It was not far to walk from my hotel to the new SOAR studio. So there was still a little time to do something really British: have an after-work beer with Richard in a pub.

When we arrived at Clifton Street, a really chic studio awaited us with its first guests. Over the course of the evening, the two floors were filled with many interesting runners, artists, bankers, podcasters and, of course, the SOAR team.

It was a special time for me to meet all the people in person, some of whom I have been in regular contact with for years. Rob is one of the SOAR veterans and just as fine a guy as Tim Soar himself. It was so much fun to talk to them about running, but also about the current and the next collection.

But actually, all the talks were about running. No wonder, because among the guests were Michael from the Run Testers and Danny from The Big Run Podcast. But also Team SOAR coach Matt Yates or photographer Alex McArthur.

It turned out to be a long but very entertaining evening in good company with cold drinks, hot pizza and inspiring conversations.

The night was too short, of course, but ok overall. After a walk across Tower Bridge, I stopped for breakfast at the Watch House – following a tip from Eugen.

Then I went to Big Ben, Westminster Abbey, Piccadilly Circus, Trafalgar Square and the National Gallery. But the queue there was just too long for me.

Instead, I walked over to the Southbank Centre and had a look at the hustle and bustle there. But the mileage of the two days was starting to show in my legs, so I left early for the airport.

I am taking home a lot of new and vivid impressions. London is a great city that I will certainly want to visit again soon. Even though it was quite a feat to make the two days possible at all.

But the highlight for me was definitely the SOAR party: uncomplicated, diverse and with a central, common theme: running. Of course it was also exciting to hear Tim personally explain some of the pieces from the upcoming collection. But I found the exchange about training, competitions, shoes and injuries even more exciting. Just what runners talk about.😉

For transparency: SOAR invited me to the party, but I was in London at my own expense and out of my own interest.