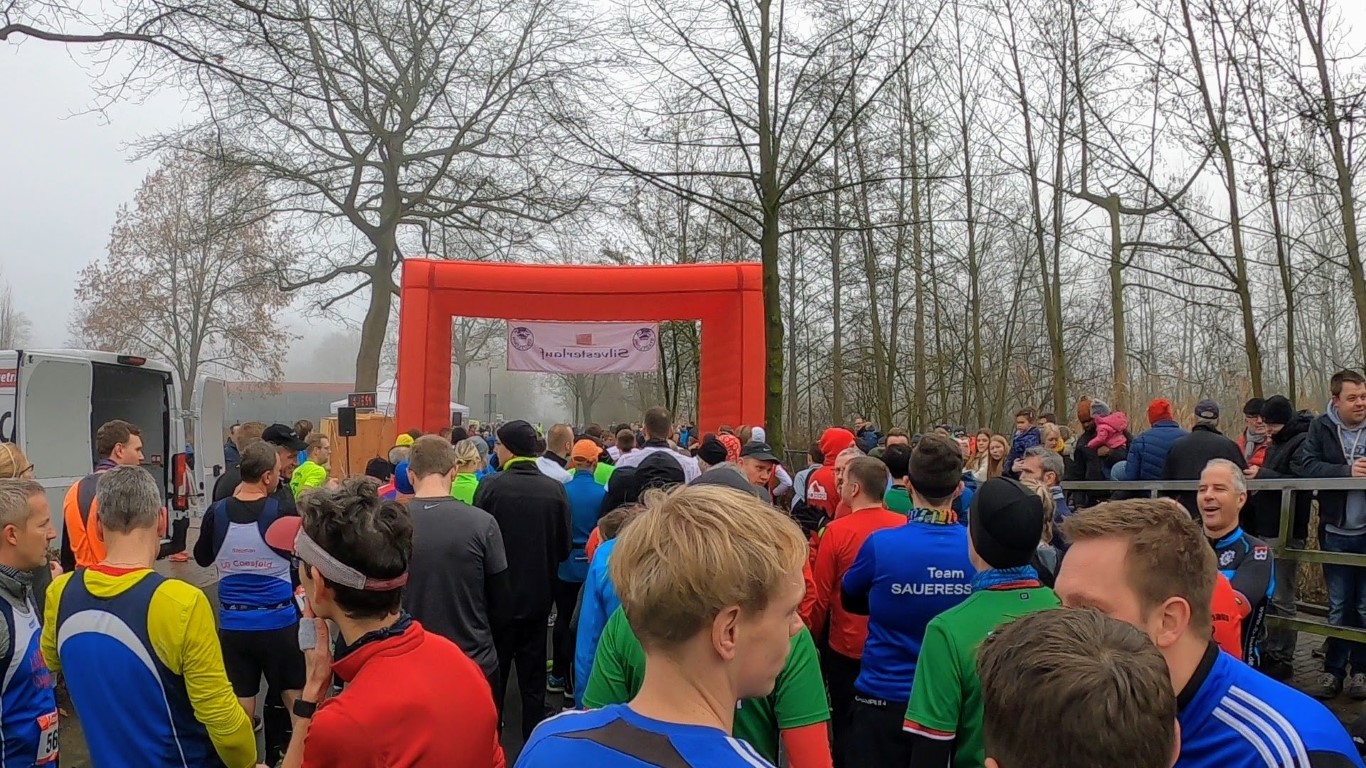 It’s the last day of 2019. What could be better than to get into your running shoes again and put on a race bib. :)

For three weeks now, I have been back on the training schedule for the Klippenlauf (yes, it’s 16 weeks…), so the easy runs have already been joined by intervals and threshold runs. Based on my long runs, we could have opted for the 15k distance. But then again I was happy to run with Norbert again, who reduced his running volume lately and we decided to run the (much more popular) 8k this year.


The pleasant thing in Stadtlohn is the (warm) sports hall right next to the track. Many running groups and clubs traditionally meet here at the end of the year. Accordingly, there was already a lot going on when we arrived. Still in the queue for registration we met our first friends: Tobi and Thomas arrived with LG Coesfeld. Then we met Lisa and Chris on the grandstands.

On the way to the start we quickly agreed that we should definitely warm up. With just over 3°C it was quite cold. But there wasn’t much time for that until we had to get into the starting field.

We had placed ourselves relatively close to the front, right next to Thomas, Michael and other LG runners. They set a very comfortable pace right from the start, which was somewhere around 5:00 min/km. The plan was just to run along – without any big ambitions.

But the pace quickly turned into 4:30 min/km, which meant that we lost Norbert. With Thomas as pacemaker I could even have a good chat – until my shoelace opened and I had to go to the side (KM 4.5). It took me a minute before I could start chasing again.

On the other hand, I ran with a smooth 4ish-Pace, which of course was very exhausting. The downhill passages helped – but not that uphill at the sports field… Although I had almost reached Thomas again, my wheels started falling off. ;)

With a good sprint at the end I crossed the finish line after 36:35 minutes and thus much faster than I had expected! Even without deducting the pitstop minute, this comes out to a pace of around 4:30 min/km. Best effort till… long time!

In the (as always) very sociable finish area and with warm tea I could welcome Norbert and Tobi right behind the line.


Back in the sports hall we treated ourselves with a piece of cake and went over our running plans for the new year. The New Year’s Eve run was again a very great event, which will certainly be on my schedule again next year.

Fun fact: I started with the race number 777 and my watch showed a distance of 7.77 km at the finish line! :) The underdistance was caused by the new Stryd V3, which I apparently have to calibrate after all, which was not the case with the predecessor.